Cour 4 at Southern Boundaries Tennis Courts is temporarily closed until further notice due to surface damage. We are working on a solution to open it back up as soon as possible.

Visit the athletic rentals page for complete details on renting a field or court at Southern Boundaries Park.

The mural on the bathroom and storage facility at Southern Boundaries Park was created by artists Julia Gartrell and Julienne Alexander during summer 2017. Before the artists began their work, they asked park visitors to write down their ideas in chalk on the wall that would soon become the mural. Gatrell and Alexander held two photo shoots with local residents to obtain silhouettes in action. After the photographs were taken, they projected and painted the images on the facility walls to complete the mural. 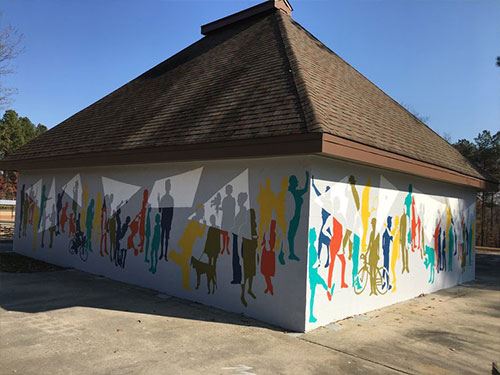