The basketball courts at East End Park will be closed beginning Wednesday, November 16 until further notice for light installation. Check back for updates!

Visit the athletic rentals page for complete details on renting a court or field at East End Park.

In addition to supplementing the diversity of the City’s growing public art collection and supporting the facilities available at City parks, the Neighborhood Park Mural Project aims to engage local artists in the creation of murals that celebrate the culture and history of Durham’s neighborhoods. Sarahlaine Calva is a Raleigh-based artist who holds the goal of reflecting the positive and diverse creative influences of Durham in her bright, colorful work. Calva’s mural is installed on the newly renovated bathroom facility at East End Park. 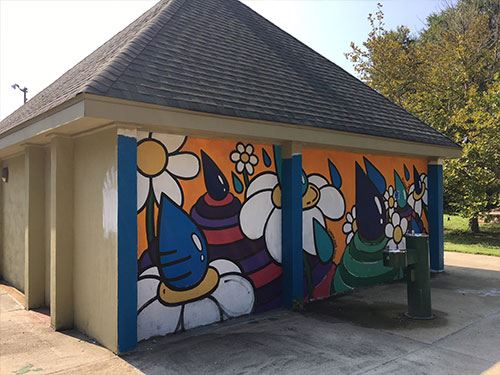 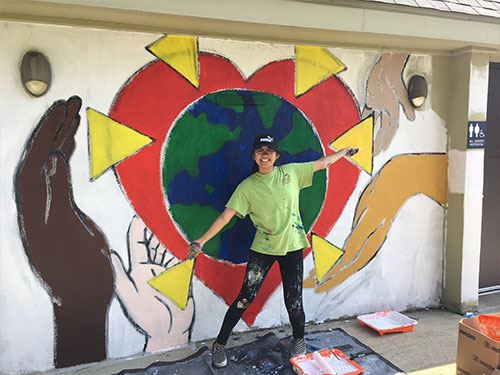 The East End neighborhood was developed from former farmland in the late 1890s to provide homes for Durham's growing number of industrial workers. The City also located buildings here, including the distinctive 1925 stone and mortar building at the corner of Gilbert Street and North Alston Avenue that started as a stable for the City's fire engine horses.

In 1932, local philanthropists John Sprunt Hill and Annie Watts Hill donated land along Goose Creek to form the two parks that are today known as East End Park and Long Meadow Park. East End received funding in 1949 with a picnic structure/restroom building. In the mid-1950s, the E.D. Mickle Community Center was built in East End Park (Mickle was a trustee on the board of the first African-American library in Durham). The Community Center is no longer open for programming, but both East End Park and Long Meadow Park have received significant renovations over the years, including ball fields, tennis courts, basketball courts, a sprayground, and playgrounds.